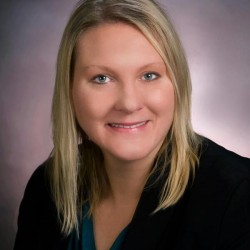 While growing up in Kansas City, Missouri, Jeanna Woods first found her love of caring for the elderly as a high school volunteer at a local nursing care center.  She began her career in Geriatrics in 1996 while completing her undergraduate degree at Missouri State University in Springfield, Missouri.  After moving to St. Louis, Missouri, Jeanna became a proud member of the Delmar Gardens Family in 2000 and worked as a Social Worker.   During that time she completed her graduate degree at Lindenwood University in Health Care Management.

Since 2002, Jeanna has been the Administrator of the beautiful Delmar Gardens of Creve Coeur, a 136-bed facility.  In 2012, Jeanna was awarded the Missouri Health Care District III David Duncan Administrator of the Year Award.   In civic support of her community, Jeanna has served six (6) years as an active Board Director of the Creve Coeur-Olivette Chamber of Commerce including one term as Board President.   Jeanna understands that it takes a team of special people to make a nursing center a home.  She cultivates and nurtures this environment with daily conversations and interactions with family members, residents, and staff, enjoying every minute.